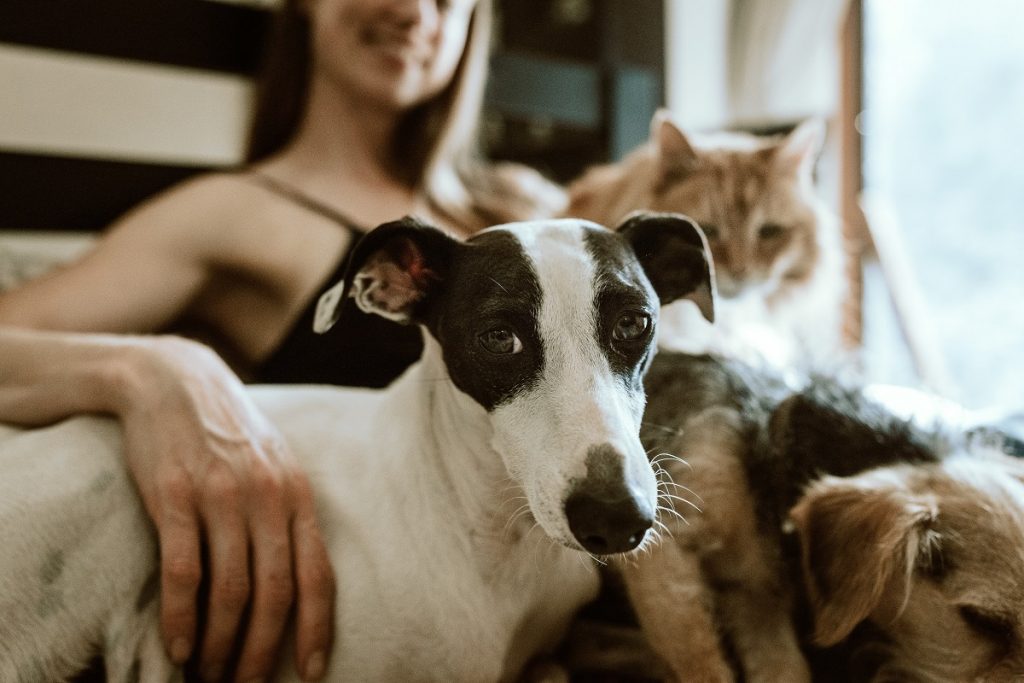 Pets – So Important to the Single Person

I never talk about friends and family without including pets in the mix.  If you don’t already know it, I am a cat person.  Really, I’m just an animal person, period.  I think animals enrich our lives in ways we probably don’t even recognize.  I have two cats and as far I’m concerned they’re my kids, especially since I don’t have any actual kids.  I know you’ve heard this before, but animals give us unconditional love.  Unconditional love!  What other love on earth is unconditional?  Even the love you have for yourself is probably not completely unconditional.  Yet a cat will still love you even after you pin him down and trim his claws.  And a dog will lovingly lick your face even after you’ve cooped her up in a crate for nine hours.  Animals can certainly fill a love void if you happen to be experiencing one in your life.

Animals will greet you at the door when you come home, excited to see you.  They’ll curl up in your lap especially when you need them the most.  They’ll sleep in your bed with you and remind you that you’re not alone.  They’ll do whacky things that make you laugh every day.  They’ll put their faces in your face and share a moment with you.  They’ll get you up out of bed and maybe even out the door.  They’ll go for a car ride with you.  They’ll share your meal with you (whether you want them to or not).  They’ll alert you and protect you.  They’ll be there for you always.  They have no choice, you’re holding them captive.  Ha ha ha.  Sure, they’ll also throw up on your favorite rug, eat your favorite plant and chew up your Manolos, but that’s proof positive that ALL relationships take work.

I often run across single people who have no pets.  Sometimes there are allergies or a lot of travel for work or something like that that keeps them from having a pet, but when those variables are absent I really can’t believe that they don’t have a pet.  I once had both of my cats pass away within two months of each other.  I was devastated and knew it was going to be some time before I was able to adopt another cat.  But when I would leave the house there was no one to say goodbye to and when I would return home there was no one to greet me at the door and demand dinner.  My house was so empty and so quiet, and it just didn’t feel like home!  It took about one month before I realized that I needed to adopt a couple of cats, and when I did I fell in love with them immediately.

Pets have the power to turn your foul mood around and to make you smile in spite of yourself.  They also have the power to give you something to live for outside of yourself.  After losing a job that I had had for eight years, I fell into a depression that was deeper than anything I had ever experienced.  The economy was bad and I wasn’t finding a new job.  Unemployment compensation didn’t cover the bills and I watched my savings dwindle to nothing as the months passed by.  I sold all of the stock I owned and even had to borrow some money from my parents just to pay the bills.  I couldn’t even get on the phone with them without bursting into tears at some point during the conversation.  I had no idea when I was going to get a job, what type of job it would be, or if it would pay enough to keep me afloat.  I wondered if I would lose my house and if I did what I would do.  I walked around with a little grey cloud over my head each and every day.  I couldn’t get my situation off my mind long enough to even enjoy a movie or a walk around the lake.  I was in such deep despair that I made a decision one day.  I decided that if it all got to be too much, I had a choice.  I didn’t have to deal with it anymore.  I could go.  You understand what I mean by “go,” right?  I’m not talking about selling everything I owned and moving to South America to sell toe rings on the beach.  I didn’t make any plans or start researching any methods or anything like that, but I gave myself the option.  I mentally went through the list of my family and friends and determined how my actions might affect their lives.  I decided that they would all be sad, but they would all be okay without me.  Then I looked at my cats.  And I knew there was no way in hell that I could do that to them.  What would happen to them?  Where would they go?  Who would care for them?  What if they ended up in some unpleasant situation?  And how would they ever understand what happened?  They wouldn’t.  Right then and there I stopped that train of thought.  There were two living beings who needed me and I wasn’t about to shirk that responsibility.  Thankfully, not long after that I got a job, a good one, and things got back to normal.  I still think back on that time in my life and realize how powerful the relationship between people and their pets can be, especially single people and their pets.