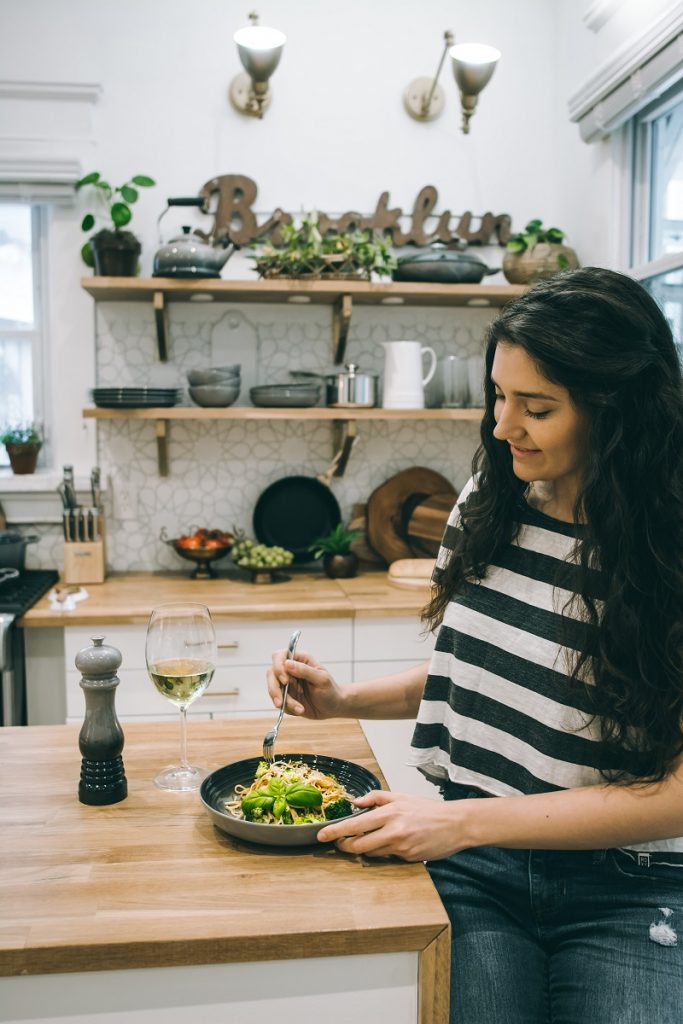 How to be Single-Savvy in the Kitchen

There was a time in my life where “cooking” meant heating something up from a box, bag or can.  I didn’t really know how to cook and I didn’t really understand why I should bother.  I did know how to bake, however, so I was no stranger to the kitchen.  And since I considered myself a bit of a domestic diva – I cared about home décor, gardening, all things dessert, and wine education – it’s natural that learning how to cook fell in line.  I began watching shows on the Food Network, learned the lingo, purchased the tools and equipment, tried the recipes, and as with everything else in life, practice made perfect.  I’m not saying that I’m a prefect cook by any means, but I can now hold my own in the kitchen and I enjoy cooking very much.  What I realized about cooking for one, though, is how much more difficult it is than cooking for four or even two.

Why does the grocery store hate me?

There’s no way you can be a single woman and not experience discrimination at the grocery store.  I’m not talking about the store clerk being snarky with you, I’m talking about how everything is packaged for way more people than just you.  Even in the produce department where things are more freeform and you can get just the number of apples you need, what about lettuce, herbs, cauliflower, and even bananas?  Those heads of lettuce are huge!  I eat salad every day and I still find it difficult to use up an entire head before it goes bad.  Same with cauliflower.  I mean, how much cauliflower can one person eat before it turns brown?  Herbs are a little better because they last a little longer, but I’m here to say that I have never, EVER, used up an entire bunch of parsley or cilantro before it went slimy.  Bananas?  They come in bunches of six.  Do you eat six bananas a week?  I don’t.  Granted, nature did the packaging here, but why can’t you get half a head of lettuce or cauliflower, or a smaller bunch of cilantro?  At least you can break off the number of bananas you need, but then you get to feel guilty for messing up the system.  I’ve thrown away enough spoiled produce over the years to feed a small country for a month!

Next in line are the recipes.  I defy you to find a “regular” recipe in a “regular” cookbook or magazine, or on a “regular” website or TV show that serves fewer than four people.  They don’t exist.  The culinary world is not set up for us single girls, which could be the reason that a lot of single women say to hell with it and throw a frozen dinner in the micro.  Yes, you can usually cut those recipes down fairly easily into two servings, but then what pan do you use?  If the recipe already calls for an 8” pan and that’s supposed to serve four, then you’d need a 6” pan to serve two (it’s not 4”, trust me, do the math).  Does a 6” pan even exist?  And forget about finding some sort of normal pan for one.  Now your cooking tools are even plotting against you.  But just because you’re single doesn’t mean you’re doomed to a life of nuked Salisbury steak and enchiladas Suizas.  You can make recipes for two in the smallest pan you own, and have one serving tonight and one for lunch tomorrow.  What if you can’t stand leftovers or you want more variety than having the same thing twice in one week?  It’s true that most things don’t taste the same the second time around.  That’s why I’ve decided to share with you two of my top favorite recipes for one.  They’re delicious, nutritious, and guaranteed to turn out the perfect amount for one single girl.

Cooking for one – the recipes

Notes:  Corn tortillas will keep in the fridge for a long time. Buy a bottle of lime juice. It’s not my first choice, but it keeps in the fridge for a long time, too. Thankfully, most grocery stores carry the “baby” avocados so you’re not stuck trying to preserve half of a large one. You can buy the bag of pre-shredded cheddar and use the rest of it for other things. You can make these vegan by omitting the cheese.

½ t salt, plus more for tortillas

Preheat oven to 350 degrees.  Spray a baking sheet with cooking spray, place tortillas on the baking sheet and press into the cooking spray to coat the undersides of the tortillas.  Spray the tops of the tortillas with more cooking spray, sprinkle lightly with salt and place in oven.  Bake until light brown and crispy, 12-15 minutes.  Meanwhile, mix together the corn, tomatoes, red onion and cilantro in a small bowl.  Add the olive oil, lime juice, cumin, salt and pepper, and thoroughly combine.  Taste for seasoning and add more, to taste.  Remove tortillas from the oven and sprinkle each with 1 oz cheddar cheese.  Return to oven until cheese is melted.  Remove from oven again and place tortillas on a plate.  Layer half of the avocado on each tortilla and top with corn salsa.  Enjoy!

You can buy small cans of the nuts and make this recipe over and over. Nutritional yeast can be found in the baking aisle and will last a long time in your pantry. You can use jarred chopped garlic, which will last in the fridge for a long time. Buy a bottle of lemon juice. It’s not my first choice, but it keeps in the fridge for a long time, too. Sprinkling the pasta with parmesan makes it non-vegan unless you use vegan cheese, but it sure makes it delicious! Toss in some broccoli or halved Brussels sprouts to get your veggies.

Cook pasta according to package directions.  Meanwhile, place all other ingredients in a high-speed blender and blend on high until smooth and creamy, 1-2 minutes.  Drain pasta, return to pan, and pour Alfredo sauce over pasta.  Toss to coat.  Sprinkle with parmesan cheese and enjoy!

Tell me what you think!

I’d love to know what you think about these two recipes.  They’re intended to use ingredients that either keep well in the fridge or pantry, that you’ll use for other recipes than just these, or where you’ll use the whole thing.  Shoot me an email and let me know how they worked for you!